In the next months I will keep writing about heat transport: Detailed simulations versus maverick’s rules of thumb, numerical solutions versus insights from the few things you can solve analytically, and applications to our heat pump system.

So I checked what I have already written – and I discovered a series which does not show up as such in various lists, tags, categories:

[2014-12-14] Cistern-Based Heat Pump – Research Done in 1993 in Iowa. Pioneering work, but the authors dismissed a solar collector for economic reasons. They used a steady-state estimate of the heat flow from ground to the tank, and did not test the setup in winter.

[2015-01-28] More Ice? Exploring Spacetime of Climate and Weather. A simplified simulation based on historical weather data – only using daily averages. Focus: Estimate of the maximum volume of ice per season, demonstration of yearly variations. As explained later (2017) in more detail I had to use information from detailed simulations though – to calculate the energy harvested by the collector correctly in such a simple model.

[2015-04-01] Ice Storage Challenge: High Score! Our heat pump created an ice cube of about 15m3 because we had turned the collector off. About 10m3 of water remained unfrozen, most likely when / because the ice cube touched ground. Some qualitative discussions of heat transport phenomena involved and of relevant thermal parameters.

[2016-01-07] How Does It Work? (The Heat Pump System, That Is) Our system, in a slide-show of operating statuses throughput a typical year. For each period typical temperatures are given and the ‘typical’ direction of heat flow.

[2016-01-22] Temperature Waves and Geothermal Energy. ‘Geothermal’ energy used by heat pumps is mainly stored solar energy. A simple model: The temperature at the surface of the earth varies sinusoidally throughout the year – this the boundary condition for the heat equation. This differential equation links the temporal change of temperature to its spatial variation. I solve the equation, show some figures, and check how results compare to the thermal diffusivity of ground obtained from measurements.

[2016-03-01] Rowboats, Laser Pulses, and Heat Energy (Boring Title: Dimensional Analysis). Re-visiting heat transport and heat diffusion length, this time only analyzing dimensional relationships. By looking at the heat equation (without the need to solve it) a characteristic length can be calculated: ‘How far does heat get in a certain time?’ 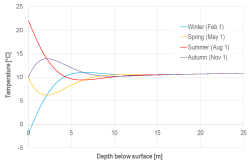 [2017-02-05] Earth, Air, Water, and Ice. Data analysis of the heating season 2014/15 (when we turned off the solar/air collector to simulate a harsher winter) – and an attempt to show energy storages, heat exchangers, and heat flows in one schematic. From the net energy ‘in the tank’ the contribution of ground can be calculated.

[2017-02-22] Ice Storage Hierarchy of Needs. Continued from the previous post – bird’s eye view: How much energy comes from which sources, and which input parameters are critical? I try to answer when and if simple energy accounting makes sense in comparison to detailed simulations.

[2017-05-02] Simulating Peak Ice. I compare measurements of the level in the tank with simulations of the evolution of the volume of ice. Simulations (1-minute intervals) comprise a model of the control logic, the varying performance factor of the heat pump, heat transport in ground, energy balances for the hot and cold tanks, and the heat exchangers connected in series. 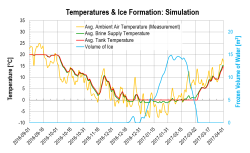 (Adding the following after having published this post. However, there is no guarantee I will update this post forever ;-))

[2017-08-17] Simulations: Levels of Consciousness. Bird’s Eye View: How does simulating heat transport fit into my big picture of simulating the heat pump system or buildings or heating systems in general? I consider it part of the ‘physics’ layer of a hierarchy of levels.

This site uses Akismet to reduce spam. Learn how your comment data is processed.

“It does not do harm to the mystery to know a little about it. For far more marvelous is the truth than any artists of the past imagined! Why do the poets of the present not speak of it? What men are poets who can speak of Jupiter if he were like a man, but if he is an immense spinning sphere of methane and ammonia must be silent?” –Richard Feynman